The four year and seven month wait is finally over!!! This time period felt like the complete vanishing of the world's finest band but TRIPPER is now available everywhere and it is even more glorious than anyone could imagine. Hella makes an absolutely gargantuan return with their first album since There's No 666 in Outer Space, marking a distinct new chapter in their legendary catalog.

Buy this beast on LP or CD via Sargent House or digitally, in any file format, via bandcamp. 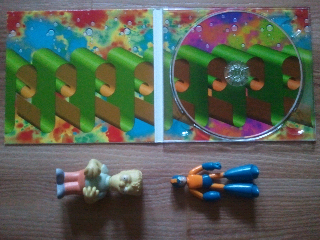 Posted by Mark Palmer at 6:52 PM No comments:

Posted by Mark Palmer at 5:20 PM No comments:

When Hella's debut record, Hold Your Horse Is, was unveiled on March 19, 2002, the greatest band in history was introduced to the world. The two people known as Spencer Seim and Zach Hill created a sound that had never been heard before. That one record alone showed an indescribable concoction of musical ability and outright genius, with each consequent album revealing new directions and techniques. An impressive string of releases in various formats occured over five years. On January 30, 2007, their final masterpiece was released, There's No 666 in Outer Space. Tragically, their output seemed to end when they finally realized their initial vision of being a five piece band.

Luckily for the world, Spencer and Zach have decided to once again join forces as a duo to enlighten minds and obliterate aural categorization. Tripper will come out on CD and LP via Sargent House one week from now, August 30, 2011. This album comes almost five years after their last one. In recognition of this monumental occasion, I will post songs from their mammoth career.


"Been a Long Time Cousin" from Hold Your Horse Is


"Who Ray" from Total Bugs Bunny on Wild Bass


"Better Get a Broom!" from Live (split with Dilute)


"Suistyle" from The Devil Isn't Red


"Stephen Hawking Has a Posse" from Div/orce Vol. 1 (split with Four Tet)


"Song From Uncle" from Chiprin' Hard


"If I Were in Hella I Would Eat Lick" from Homeboy

Email ThisBlogThis!Share to TwitterShare to FacebookShare to Pinterest
Labels: hella, republic of rough and ready, tripper

Posted by Mark Palmer at 1:40 AM No comments:

Zach recently did drums for a song by Spoek Mathambo. It is called "Dog to Bone" and will appear on Put Some Red On It, an EP to be released by Sub Pop. Spoek is described as a "Rapper/DJ/Graphic Designer/Illustrator" who is from South Africa. The official information states that this EP would be released digitally in late July but there is currently only one song available, entitled "Put Some Red On It".

Posted by Mark Palmer at 1:04 AM No comments:

Sol Invicto have finally released their EP with Zach!! The 21 minute piece, entitled Initium (originally known as Unidose), was made available to members of the Sol Invicto mailing list just a few minutes ago. The first mention of this collaboration was in 2008, though the reason for such a long delay is unknown.

Posted by Mark Palmer at 5:30 PM No comments:

Email ThisBlogThis!Share to TwitterShare to FacebookShare to Pinterest
Labels: hand on the pump, sol invicto

Death Grips' planetary takeover continues, as they perform in the UK four times:

Of course, further dates could be added at any time.

Posted by Mark Palmer at 4:30 AM No comments:

Death Grips in Oakland, Austin and the UK

After obliterating the east coast, Death Grips travel back to their homeland and onto some uncharted territory. Here is a full list of all of their upcoming shows, including two just announced:

They will be playing the UK in September 2011, though the dates and venues are unknown at this point.